As the first RS400 sailors arrive at East Lothian YC for the Noble Marine Rooster National Championships, starting on Monday, the RS Class Association are delighted to announce that Wednesday will be Stewart Brewing Day.

Stewart Brewing is an independent craft brewery based in Loanhead, Midlothian, and was established in 2004 by Steve and Jo Stewart. It produces beer in small batches which are available in about 200 pubs in Edinburgh, the Lothians, Fife, the Borders, Glasgow and Newcastle.

The brewery has strong ties with both the RS400 fleet and East Lothian Yacht club, having been the sponsor of the RS400 and RS200 Scottish tours for some time and Steve Stewart a former member of ELYC.

The brewery will be donating generous prizes for the day’s racing, but for those not lucky enough to win, the club’s draught beer is exclusively Stewart’s.  Sailors not travelling to North Berwick for the event need not miss out either, Stewart’s renowned mixed cases of traditional beers including Holyrood, Edinburgh Gold and Stewart’s 80/- and more unusual beers with intriguing names such as Radical Road and Masterplan can be ordered online.

Steve Stewart said “We are proud to sponsor the RS400 Sailing National Championships and wish all the local teams competing good luck in the race!” 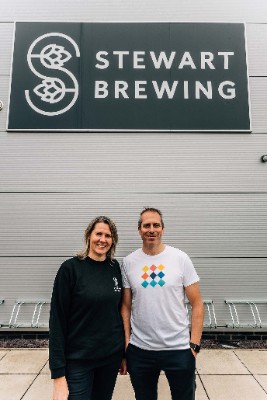