Results to date have been published for the TridentUK Northern Tour and Rooster West Country Boat Repairs Southern Tour.

We are half way through the season with 4 events gone and 4 to go. Ollie Groves and Esther/Sam are out in front counting two first places, with Chris Pickles with Matt close behind counting 2 second places. Barry Thornton and Nick are third and then three boats are ied on 6 points in joint fourth. Clearly all is to play for in the second part of the series.

If you have not entered an event you can still qualify for the overall series as only 4 events count. So far 41 boats have competed in at least one event. Hopefully by the end of the year that figure will nearly have doubled.

The next is event is the unique Lord Birkett Trophy at Ullswater YC on 2/3 July, with two long distance races.

Hope to see you on the water.

Two thirds of the way through the Rooster West Country Southern Tour 2022 and our current champs Steve and Sarah Cockerill are carving their way out to another Southern Tour victory. All however is still to play for. Hot on their heels are Jon Hessig and Nicky Griffin who have always shown consistent top results and skill in all conditions. Just one point behind them are the tour de force pair Christopher Eames and Rachel Tilley who are fresh back from a blisteringly good performance at the Eurocup in Carnac. Dark horses Sam Pickering and Emily Heath are currently in fourth and definitely ones to watch.

Next up is the Southern Champs at Parkstone on 16/17 July, this is also a Rooster National Tour event, so we expect some Northern visitors too - a good chance to see how we all align ahead of the RS Games and the Noble Marine Rooster Nationals!

Now just 5 weeks to until the RS Games and 7 weeks until the Noble Marine Rooster RS400 Nationals, but it's not too late to enter! 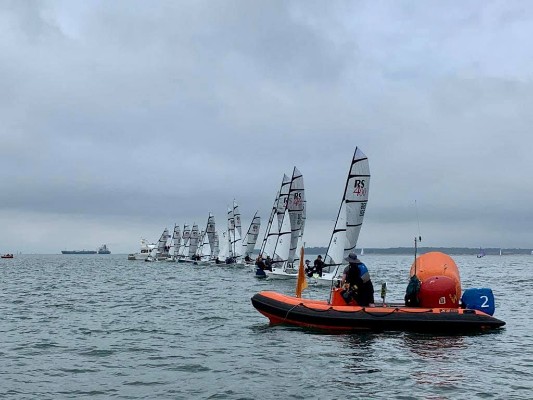