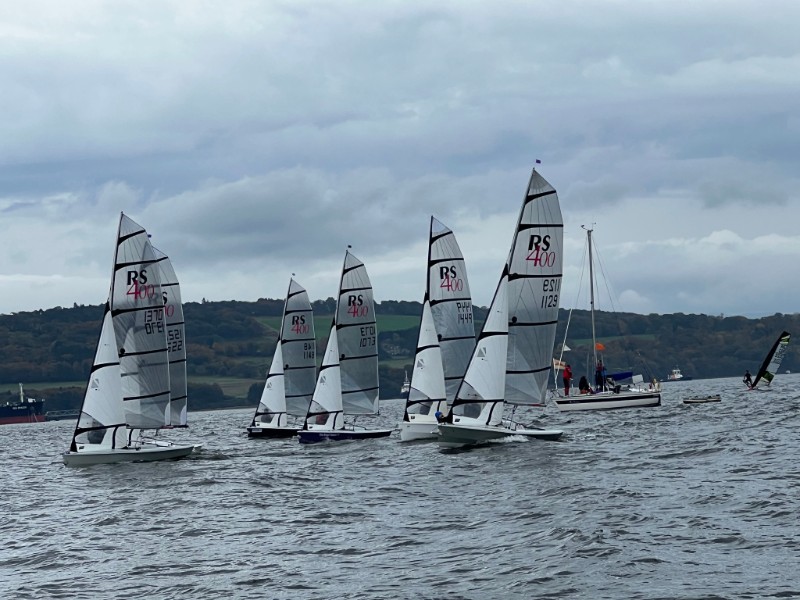 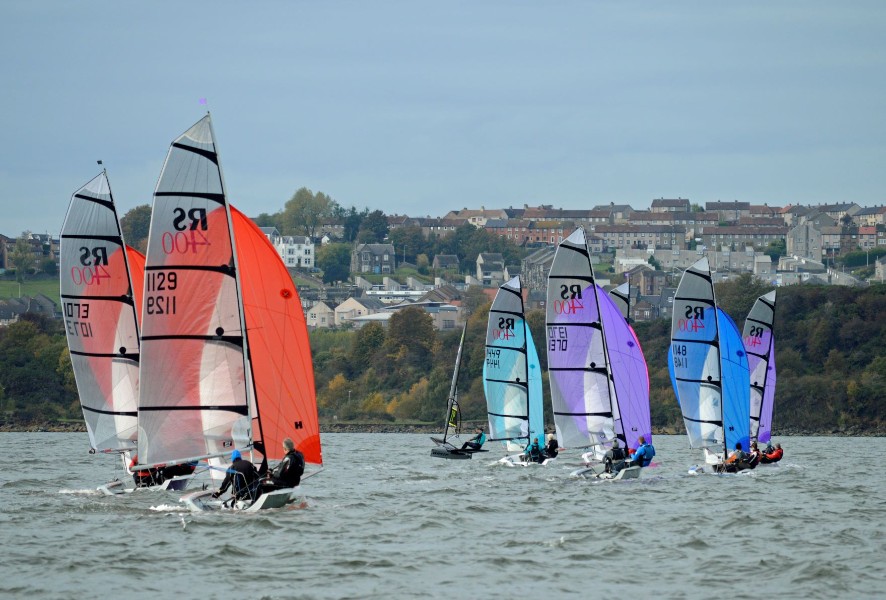 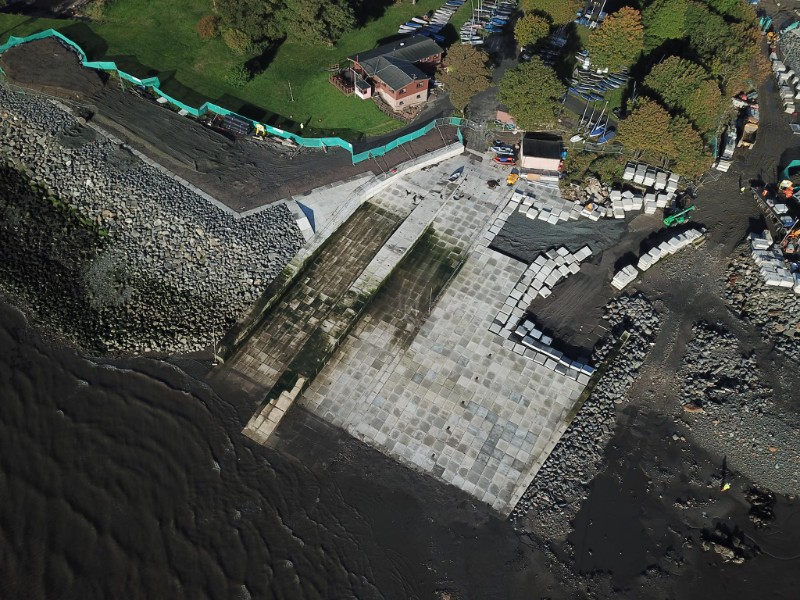 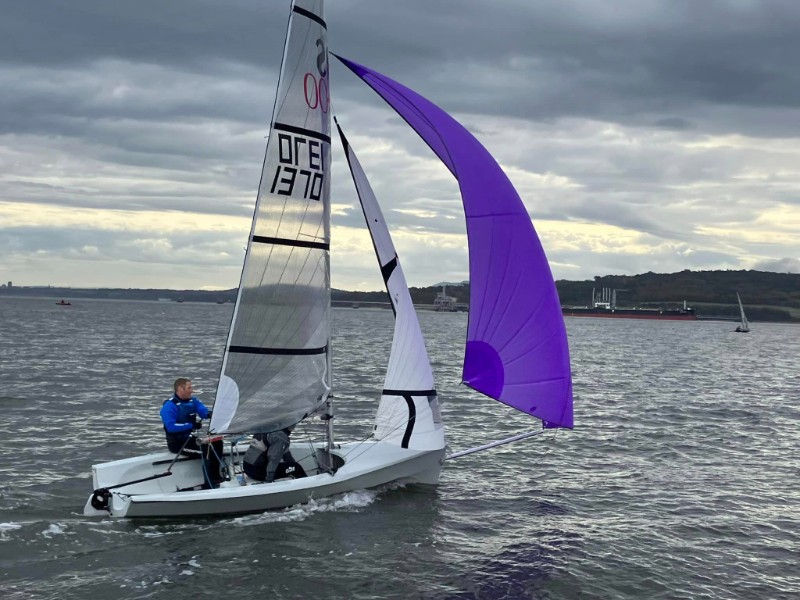 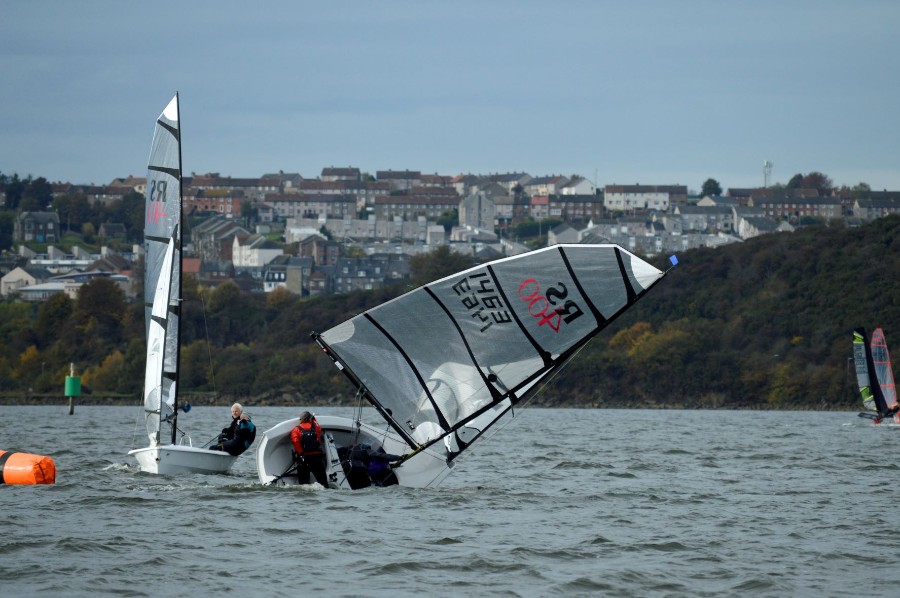 Despite the less than optimal forecast a select band of dedicated RS400 sailors travelled to Dalgety Bay Sailing Club on the north shore of the River Forth for the final traveller event of the Stewart Brewing RS400 Scottish Tour.  The club is almost at the end of major infrastructure works to massively increase the size of the slipway , and everyone was excited to see the extent of the new partially-open facilities which will be absolutely amazing when complete.

Unfortunately, the Satusday forecast proved true and although the PRO held on as long as he could the breeze failed to materialise hence racing for the day was abandoned at 3pm. This was just as well as a few of the senior members decided that staying up with the Waszp class until 2am for a campervan party was the most sensible way to prepare for the weekend and were not too upset by this outcome.

Sunday started much more promising with a F2-3 from the east on a rapidly rising tide and everyone keen to get going. That is except Mr $ Mrs Robertson sailing “Grandad” – they called the weekend pretty much perfectly opting for grandparent duties on the Saturday , then driving up just as the rest of the fleet launched, to efficiently unpack their boat and gracefully  arrive in the race area just as the postponement flag came down!

The first race was pinnish and into the shore to dodge the tide – Robertsons were there first with John and Andy sailing “El Commodor” and Keith / Hannah sailing “Don’t hit me” folding in below. The 1st 2 stretched their legs and extended a small lead by the top of the beat at which point KB misjudged the tide on the lay to let the first 2 escape and eventually finish in that order.  Further down the fleet a close battle was being fought between Pete / Ruary in “I’m not buying an Aero” and Hester / Richard in “The Downwind Rocket”.

The 2nd race was similar with the breeze softening slightly. It was again 1,2,3 Robdobs at the windward mark however KB/Hannah managed to get the soak into a leeward gap on the leaders and a gybe into a convenient puff allowed them to take the lead at the leeward. They managed to defend this on 2nd run and were happy to see a shorten course flag to take the win , with the Robdobs hunt for more tide / breeze out in the river proving fruitless and finishing just behind the ever consistent Team Mackenziebox who were again 2nd.

R3 and the breeze picked up to top end of a 3 with tide slack , it was a hang on and hike affair. Again Robdoba nailed the windward – and then entered the running for the weekend Duckhams award with a spectacular drop of the mainsheet which was helpfully captured on photo by the RIB crew. Proving yet again that a boat is basically an extension of a Robertson body the pair somehow recovered, to maintain the lead from John / Andy which they kept to the end ! KB/ Hannah held 3rd despite some spirited challenge from Team Taylor and Hester / Hope. The Great Gonzo (Jamie and Neil) and The Wormit Boys in “The Hellenic Republic” were enjoying close racing with much place changing.

For R4 – all to play for and the Robadobs decided it was time for a cuppa and some cake – so headed for home leaving the rest to fight it out. KB and Hannah psyched themselves up for a determined challenge on El Commodor – but the battle was almost over before it started with an error on the start line leaving them last off the line watching John / Andy shoot off upwind. A spirited comeback wasn’t enough to make any impact and it was The Wormit Greeks who had finally remembered that a 400 sails differently from an Ionian cruising yacht,  and sailed a textbook race to take an impressive 2nd , followed by KB/ HR in 3rd and PT/RW in 4th.

Ashore there was some confusion as to whether the discard came in after R3 or R4. In the end , and in a somewhat predicable fashion Team Grandparents had the event sewn up with their 1,3,1 scoreline – John and Andy 2nd losing on countback and Hannah / Keith 3rd 2 points behind in 3rd. Great racing in a variety of conditions and everyone gave thanks to PRO Gavin Homer, the race team and RIB crews for organising a very efficient event.

There was much discussion over the weekend about the 2023 Stewart Brewing RS400 Scottish Tour with numerous creative suggestions to boost attendance –childrens creche , ice cream stops and sprint / team racing seemed to be the most popular. With 50 boats in Scotland and 3 new boats bought this year it is shaping up to be extremely competitive – and with glam venues Lake Garda for the Eurocup , and the nationals at Mounts Bay there is plenty on offer for all levels of the fleet. The RS400 class has a demo boat available to any location in Scotland – so if you’re interested in giving it a shot please get in touch via our Facebook page or the Class Asssociation.  Oh yes – and did I mention we are sponsored by a brewery too !

Photos thanks to Steev Webb and Ian Baillie